The watchword for 2022 is risk. While the U.S. economy remains strong overall, with robust job growth and consumer spending, the five biggest macro trends are characterized by interconnected risks.

First, inflation has jumped to 40-year highs, fueled by clogged supply chains, sizzling consumer demand, and a period of loose monetary and fiscal policy enacted to battle the COVID-19 downturn. The war in Ukraine and sanctions on Russia have exacerbated inflation, as both countries are major producers of commodities, wheat and energy products. The supply-chain crisis – made worse by China’s zero-COVID policy – has helped propel housing prices to record highs.

As the Federal Reserve course-corrects to quash inflation by aggressively raising rates and quantitative tightening, recession fears are growing. The Fed’s actions are also rippling through the housing market as mortgage rates, which are linked to the 10-year Treasury and the Fed’s balance-sheet rundown, continue their rapid ascent. This could put homeownership out of reach for many prospective buyers, slowing demand and potentially benefitting multifamily rentals. Meanwhile, escalating geopolitical conflicts would be very concerning for all of these factors.

The economy and real estate could potentially skirt these risks and continue to plow ahead, but rough waters may lie ahead. SitusAMC Insights takes a closer look at the current macro trends in 2022 to watch, which include inflation, the recession, supply chain backlogs, residential market craze, and geo-political instability.

U.S. inflation came in at an 8.3% annual rate in April, down from 8.5% in March, a 40-year high, the Labor Department reported. The core CPI, which excludes volatile energy and food prices, reached 6.3% in April, higher than expected. Federal Reserve governors and economic analysts believe that the inflation rate will not rise any further, but it is unclear how long inflation will remain high, how embedded it has become, and how fast the rate can be brought down. Meanwhile, the Fed is poised to be aggressive in both raising short-term interest rates and reversing quantitative easing, putting upward pressure on long-term rates, and creating ripple effects for real estate investors and homebuyers.

Shelter costs, whether rent or the rent-equivalent for homeowners, account for one-third of the CPI. April’s shelter cost jumped 4.8% year-over-year, a pace not seen in about four decades. Inflation hurts property owners as rising energy, labor and maintenance costs eat into net operating income. However, soaring construction costs and supply-chain issues are keeping new supply in check. An inflationary environment also provides more leeway for property owners to pass on rent increases, but that benefit is uneven across property segments, with apartments and triple-net retail landlords faring best due, respectively, to shorter lease terms, and the ability to pass expenses to tenants.

A SitusAMC Insights analysis concludes that commercial real estate has historically provided a moderate hedge against inflation, with rising rents and values offsetting increases in expenses. Apartment and office are the best buffers against inflation historically. The real estate inflation hedge is even stronger during periods of high inflation (defined as greater than 5%). Unsurprisingly, bond and stock returns are the asset classes most hurt by inflation, reflected in the recent sell-off.

With the Fed in the process of both traditional monetary tightening and quantitative tightening, recession worries are rising. These were heightened by the early-April inversion of the 2-year/10-year yield curve and a report that the economy contracted by an annual rate of 1.4% in the 1Q 2021, according to the U.S. Bureau of Economic Analysis. Both Goldman Sachs and Moody’s chief economists put the risk of a recession over the next two years at 35%, although Marcus & Millichap’s chief economist stated that any recession would likely be mild.

Much has been made of the comparison to the Paul Volcker-led Federal Reserve’s decision to dramatically raise rates in the early 1980s to fight inflation, and the recession it provoked. The Fed may or may not be able to engineer a soft landing, given how aggressive this round of quantitative tightening is, compared to the prior round following the Great Financial Crisis. Quantitative tightening will also have a direct effect on the mortgage market, as the Fed accrued over $1 trillion in mortgage-backed securities since the start of the pandemic. The Fed has issued plans to reduce its MBS holdings by $35 billion a month starting in September (a smaller reduction will begin in June).

Still, consumers remain in good financial shape, providing some cushion. U.S. consumers, whose spending accounts for about two-thirds of GDP, are sitting on excess savings of over $22 trillion, and the national savings rate has returned to pre-pandemic levels. Therefore, consumption should hold up. Yet the potential for a recession, so soon after the economy weathered the pandemic-induced fallout, is a real concern for real estate participants. Historically, a fall in GDP and spending has brought down real estate returns much more than inflation.

In the event of recession, all property segments will experience a downdraft in space market conditions, but to differing extents. The office and retail segments, already compromised by impacts from COVID-19 and secular shifts in demand, will see the greatest rise in vacancies and rent declines. Our market analysis shows nearly all the large office and retail markets suffering significant declines if recession were to hit. The extremely robust industrial and apartment markets would also weaken, but to a much lesser extent, with many markets still enjoying healthy NOI gains over the five-year forecast horizon.

Most analysts predicted the new year would bring a resolution to supply-chain backlogs, but delays continued into 2022. The resurgence of COVID-19 is severely disrupting China’s economy and is aggravating supply-chain problems. Strict practices to prevent the spread of COVID-19 tripled the number of ships waiting offshore from Shanghai, the world’s largest container port, in just a few weeks during April, according to VesselsValue. Ashore in the U.S., record-low vacancy rates for warehouses and logistics hubs highlight the lack of space for the backlog of goods.

Meanwhile, the war in Ukraine is also worsening supply issues, disrupting agricultural exports, an impact seen in cooking oil shortages. The global energy trade is severely disrupted as countries shift from Russian supplies to other sources that are already constrained. Russia is also a major exporter of mined goods, and these too are no longer available to much of the world. The confluence of these factors feeds into prominent problems like inflation, as the scarcity of some goods increases prices. With much of the supply issues occurring outside U.S. borders and off U.S. ports., the Fed can only do so much to curb inflation.

Supply-chain issues pose an interesting conundrum for real estate. High building materials costs from supply-chain issues are to the detriment of developers and homeowners. However, these high costs are also likely to constrain new real estate supply and raise existing property values. Industrial properties will particularly benefit from the pent-up demand for goods, sustaining the fervent demand for logistics space near ports and metropolitan areas. 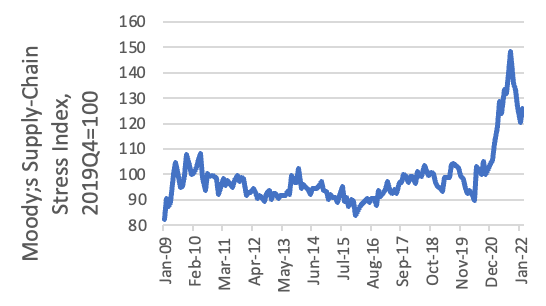 Around mid-2021, fundamentals of the U.S. housing market skyrocketed. Nationally, single-family home prices rose about 13% from the end of 2020 to the end of 2021 and widened the gap between the average mortgage payment and the average rent payment, potentially weakening housing momentum. Several markets have become overburdened by new residents and investor interest, particularly in the South and West.

In 2022, the question of whether the housing market has bubble-like conditions or is driven by fundamentals could be resolved. Mortgage rates are likely to continue their dramatic ascent, already rising more than 2 percentage points between January and May. Further increases are likely as the Fed sells off mortgage bonds in its quantitative tightening process. The key question is whether this will bring the ultra-hot housing market back to earth, and if so, will it be a gentle or hard landing?

Already, sales are slipping and future supply figures are looking up, recalibrating the disjointed supply and demand that drove much of the frenzy. If prices start to fall, either through an oversupply or a drop in homebuyer demand, that will feed back into inflation, as shelter comprises such a large component. Our analysis of the largest 82 U.S. housing markets indicates that certain markets display more signs of excess froth and vulnerability to volatility than others.

Starting With the Pandemic, The Housing Market Has Become Disjointed

The war in Ukraine has had serious but manageable consequences for the U.S. economy and real estate, at least to date. Commodity and energy prices have risen, feeding into inflation, but most real estate watchers believe the industry will remain largely unaffected. One downside risk is further escalation in the war. Another risk, wheat shortages, could sow instability in poorer nations across the globe, including some in the always-sensitive Middle East.

But, if anything, uncertainty in Europe may drive investors into relatively safe U.S. assets like real estate. This is especially true amid Fed tightening against inflation, since it makes commercial real estate and single-family rentals relatively more attractive as yielding assets with more inflation protection. What would be less manageable, however, are heightened tensions with China. Foreign policy experts fear the Ukraine-Russia war is a precursor to a similar conflict between Taiwan and China, which would prompt similar backlash from Western countries. Yet the world’s second-largest economy, one far more interconnected than Russia’s, would be hard to sever from international trade without crippling the world economy. War is unlikely to break out across the Taiwan Strait this year; the much more pressing issue is China’s zero-COVID policy and its consequences for supply chains. But tensions here are worth watching.

U.S. Economy Faces a Lot More Risks from Sanctions on China than Russia

Explore articles, podcasts, and other media related to Commercial. 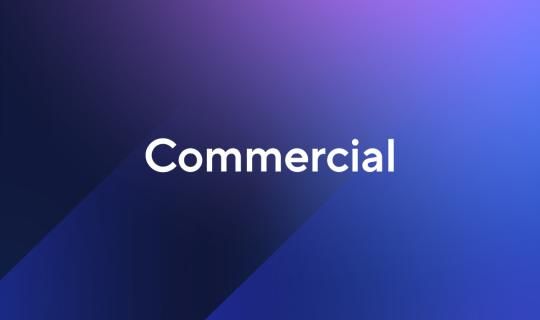 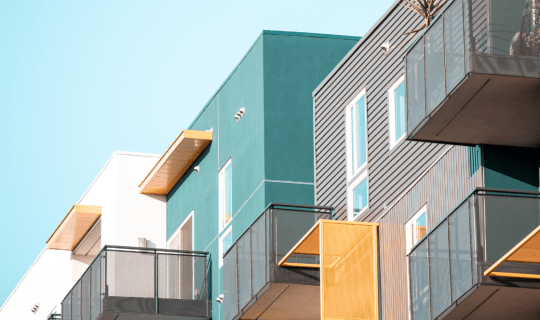 With the Federal Reserve hiking interest rates four times this year, investors are concerned about… 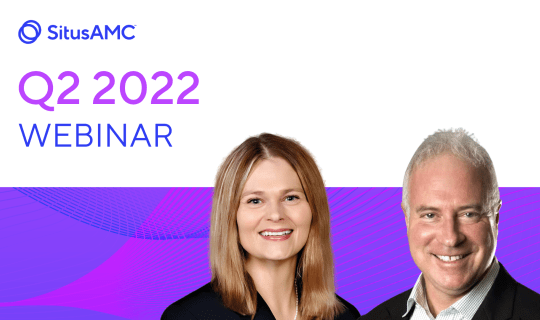