Investors Seek More Clarity on the Future of Office

As remote work becomes a permanent phenomenon, investors, owners and occupiers continue to contemplate the role of the office in the employment landscape. Analysts expect to see rising vacancies and eroding values, which will vary by market and asset quality. Meanwhile, opportunistic CRE debt investors could provide some technical support for values in 2021.

Higher Vacancies on the Horizon?

For now, the long-term nature of commercial leases is propping up office occupancy rates, which were holding steady by the end of 2020, according to NCREIF NPI-ODCE data. Vacancy rates were 11 percent in central business districts (CBDs) and 11 percent in the suburbs, said Peter Muoio, Senior Director of SitusAMC Insights. Even though many offices are running at sub-30 percent capacity, “companies are still paying rent on those offices, so they’re not vacant,” Muoio explained.

However, Muoio believes the office market is just beginning its downturn. “In 2020, office saw negative absorption for the first time since the Great Financial Crisis, but there hasn’t been a sharp deterioration as of yet,” he said. “But typical office leases are long and many tenants have strong credit and remain viable. Effective rents have declined moderately, but further deterioration in both vacancies and rents is likely in 2021.” Market participants are signaling this anticipation of further rent erosion ahead, reducing rent growth projections, contributing to value diminution.

Muoio, who conducts forecasts of the top 50 office markets, noted that occupancy fell by about 12 million square feet in 2020, and could decline another 20 million square feet this year. “We have already seen the factors affecting office in play before the pandemic – such as a shrinking amount of space per worker,” he said. “The COVID-19 pandemic has the potential to change office forever in terms of fully remote or hybrid working models. We expect office vacancy rates will surpass 19 percent in 2021, which we haven’t seen since the early 1990s.”

Demand for office space may also wane in “back-office” cities that lured companies with a lower cost of living, such as Tampa, Jacksonville and Dallas/Fort Worth. “Now that people can work remotely, we expect the possibility of less of this sort of demand for office space in cities which had positioned themselves as low-cost alternatives,” Muoio said. This impact could be at least partially offset by remote workers and other professionals choosing warmer climates with lower costs: Florida and Texas led population growth between July 2019 and July 2020.

On the bright side, medical research is a major growth segment, and life sciences companies have been buoying the office sector, putting a spotlight on cities such as San Diego, San Jose and Cambridge, MA.

Meanwhile, traditional medical offices are also attracting investor interest. “Medical office is relatively resilient to remote-work losses and has historically been recession-resistant -- though employment did take a wallop during the pandemic,” Muoio said.

While office demand may decline near-term, the long-term verdict on valuations is still out due to long-term leases and the continuing debate over how much work will remain remote post-pandemic, according to Brian Velky, Managing Director and SitusAMC Head of Real Estate Valuation Services.

The valuations SitusAMC has completed for well-leased, institutional-grade office properties have remained stable, while Class B properties are most at risk for deteriorating cash flow. “As you go down the spectrum of quality, the risk escalates, especially the rate of return,” Velky said. “Overall, we may see values decline by more than five percent to date, but we are also seeing a bifurcated capital market that is very property specific based heavily on quality, credit tenancy, and lease duration.”

Major office markets such as New York, Chicago, San Francisco, and Houston may be exposed to greater value risk than second-tier markets such as Denver and Austin; the latter benefitting from the “pandemic-era ‘Texodus’ from the Bay Area,” as one report noted. Meanwhile, CBD office markets saw significantly lower capital returns than suburban markets, according to NPI-ODCE data. (See chart.) While returns for both sectors declined approximately 1.5 percent during 2Q 2020, by the end of the year suburban properties had rebounded by 125 basis points (bp), compared to just 60 bp for CBD assets.  However, those stats can mislead one to believe that suburban office is poised to outperform CBD office, as the life science sector appears to be having significant influence on the suburban office returns.

“Capital returns look to remain negative through this year and will not contribute significantly to overall office return until 2023,” Muoio said. “I expect office to remain a slow-motion struggle for fundamentals and investor wariness about the segment’s outlook.” 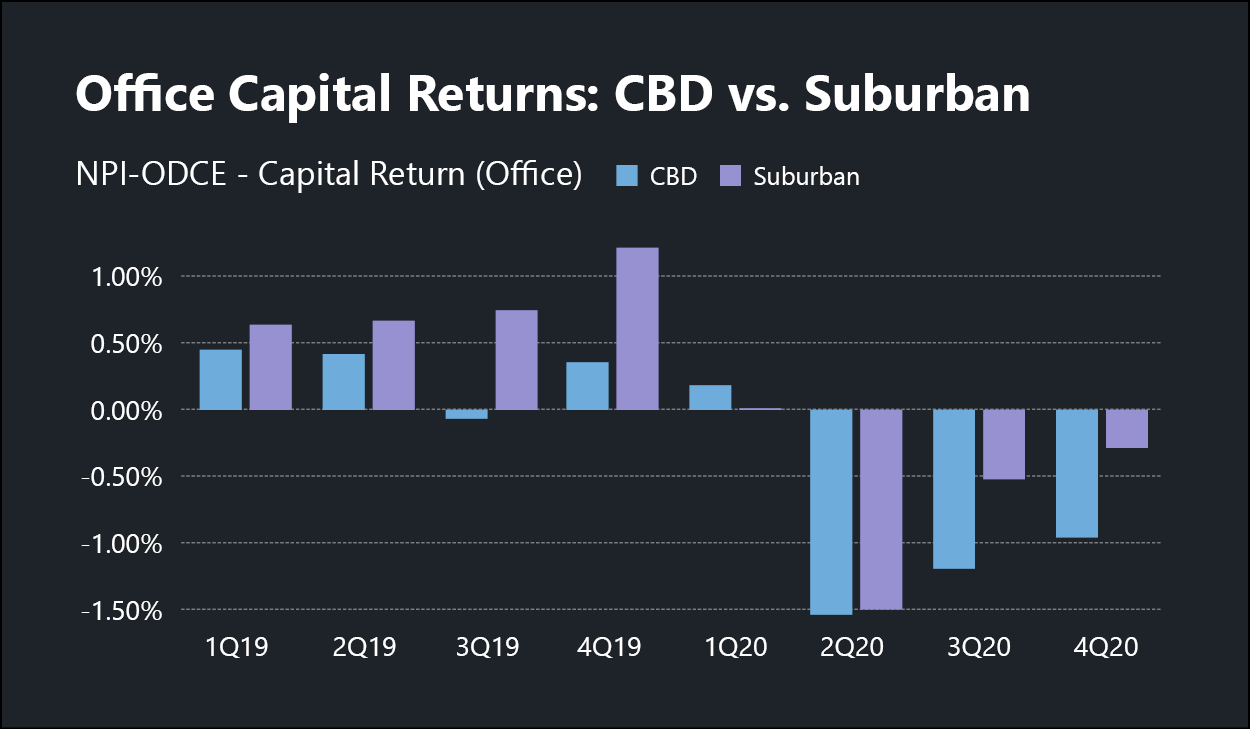 Given the challenges remote-work models pose in recruiting, onboarding and retaining talent, as well as team collaboration and culture, demand remains uncertain, Velky said. “It’s safe to say, there’s going to be greater flexibility to work from home, but at the same time, offices still offer great value,” he noted. “Remote work is likely to reduce future demand -- net absorption -- but it may not necessarily mean an immediate and significant contraction of space needs.”

Demand for CRE debt remained steady at the end of 2020, according to Andrew Taddei, SitusAMC Managing Director and Practice Leader for the Valuation Advisory and Risk Solutions group. Year over year, volumes have been relatively flat and spreads are modestly tighter as commercial mortgage-backed deals for both conduit and single-asset, single-borrower loans continue to come to market. Meanwhile, real estate investment trusts, private equity funds and insurance companies are taking the opportunity to add to their CRE debt portfolios, Taddei said.

“As employers rationalize office space needs, it remains to be seen whether this assessment will lead to a large reduction in needed space,” Taddei noted. “As office configurations change and alternating in-office workday schedules are put in place, the required square footage levels may not decline drastically.”

While a decline in demand for office space will pressure property values, “on balance, currently the debt is expected to perform, as yields remain sufficient and loan-to-value leverage is modest,” Taddei noted. In addition, planned construction, sponsor funding activities and debt forbearance agreements for office properties are expected to pick up by June or July, as much of the market is hopeful that a critical mass of vaccinations is on the way.

“Regardless of whether a market participant is a seller or buyer of CRE debt, especially in times of uncertainty, careful consideration of the debt valuation is a critical part of this market activity,” Taddei said.

To learn more about SitusAMC’s forecast reports, data offerings and real estate valuation services, explore our website or connect with our professionals:

American Rescue Plan Might Not Rescue All Tenants from Evictions

On the Hill Episode 6: Mark Calabria, Director of the Federal Housing Finance Agency

3 Essential Qualities To Look For In An Independent Valuation Provider

How COVID-19 Is Changing Borrower Behavior and Lending Risks

In Conversation: How Are Inflation Dynamics Altering the Real Estate Valuation Process?

The Skills Gap: Why Smart Companies Are 'Renting' Talent in Post-COVID World

How Technology Is Improving the Mortgage Process for Lenders, Originators and Consumers: Q&A with Rick Soukoulis, CEO and Founder of ReadyPrice

FHA Commissioner Dana Wade On COVID-19 and Expectations for 2021

Urban Exodus? Not So Fast

On The Hill: Episode Four

New Year. New Approach. (Why We Must Embrace Change)

How Technology Is Transforming Compliance in the Residential Mortgage Industry

On The Hill: Episode Three

European CRE Finance Market: Is There Light at the End of the Tunnel?

4 Factors to Watch in The Shifting Valuation Landscape

NCREIF Panel Weighs the Impact of COVID-19 on Retail Assets

On The Hill: Episode Two

Implications of the COVID-19 Crisis for Commercial Real Estate Values

On The Hill: Episode One

How The Paycheck Protection Program Is Impacting Commercial Real Estate

How COVID-19 Is Impacting Asset Values in Europe

WeWait, WeWonder – The Future of Coworking in a COVID Economy

How COVID-19 is Impacting Defaults and Workouts in Europe

Timeline of the U.S. Government's Response to COVID-19

How Covid-19 is Disrupting the Housing Market

Welcome to the New SitusAMC

At SitusAMC we are committed to helping our clients realize opportunities in their real estate businesses, driving operational efficiency, increasing business effectiveness, and improving market agility. That’s why we’ve brought together the leading firms in the industry to build a fully integrated suite of services and technology solutions to support the entire life cycle of real estate activity. To better serve our clients, we’ve migrated the following brands into SitusAMC, further streamlining our offering and positioning us to better support your business moving forward.

To learn more about the new SitusAMC, continue to our website by closing this window. If you have questions, please contact us here: